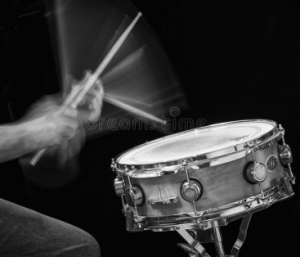 If you want to improve your single stroke roll, this system, if practiced consistently, should help you immensely.

A lot of what I share here on the blog is a result of my own practicing, gigging, and recording experience and this practice system is no exception.

In addition to explaining the exercise, I’m offering you a downloadable PDF chart that includes dates and spots for your metronome markings and other info you’ll need to keep track of your progress.

But first, let’s discuss the ever-elusive, but oh-so-beautiful single stroke roll.  Let’s begin with inspiration.  I always work harder when I’m inspired.  Usually, that inspiration comes from music and drumming.

Watch this video of Sonny Emory and you’ll see why I’m excited about the single stroke at the moment.

When Sonny plays that roll at the beginning of the solo, he holds it on the snare for about five full measures. That’s 32nd notes, at around 107 bpm. That’s not easy. He’s using french grip.

So, I’m working on that. But you can work on using whatever grip you are most comfortable with or find most useful.

I like to play my single strokes using either American or French grip. At the moment, I’m focusing on french.

Let’s get into the method. By the way, this system comes from Kim Plainfield’s great book, “Advanced Concepts” and is based on ideas from the teachings of George Lawrence Stone and Joe Morello.

As most of you know, when working on rolls, you must do work on each hand separately. If one of your hands is weaker, and usually that’s the case, then that weaker hand limits the roll.

If your left hand can only play 16th notes at 90 bpm but your right hand can play them 96, your roll will be limited to the slower number.

The exercise works by breaking up your hands and then putting them together again.

The goal is to be able to play 16th notes with each hand– separately–for 100 counts at a given metronome marking.

Next, put your hands together and play your single stroke roll (now you’ll be playing 32nd notes), with the same goal: holding the roll cleanly for 100 quarter notes.

Keep in mind that above a certain tempo it will impossible to hold the roll or the 16ths one-handed for anywhere near that long. That’s OK and it’s expected. We’re training here.

For the 16th note triplet roll, start at the low end at 80 bpm and work your way up to your max of somewhere around 185. Yes, I know that sounds impossible, but if you can do one-quarter note of a roll at 140 with 32nd notes, the equivalent speed for 16th note triplets is actually 186.66!

You don’t need to work on all tempos all the time. Try working on 8 at a time. When you can easily (and consistently) get through 100 counts at a given metronome marking, cross that number off and move up to the next number as your lowest marking.

As I mentioned earlier, you’re going to hit metronome markings that are impossible to hold a roll for 100 counts (or even for 4 counts). That’s OK. Work on it anyway. Do the exercise and mark down how many beats you can hold the roll for.

You’ll be surprised at how this increases your overall single stroke roll endurance and speed.

Don’t forget that speed comes from relaxed, efficient movements and from using bounce. Watch your form and grip. The slower tempos are great for working on your mechanics.

Also, notice what happens when things break down. One of your hands will usually have some sort of form breakdown as the speeds increase. But you may also notice faulty form at slow tempos. That’s OK. Just fix the form (I know, I know, easier said than done) and that will help you improve your roll and your overall technique.

Seriously, though, work on that form. This exercise will reveal those problems–take advantage of that and fix them.

Pick a metric–either 32nd notes or 16th note triplets–and commit to the method for 30 days. Watch what happens.