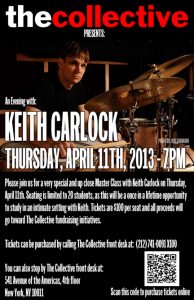 It’s been a while since I’ve been excited enough about someone’s playing to go to a master class. Probably the last time I did this was when I went to see Dave Weckl at the Collective over twenty years ago.

But I really like Keith Carlock’s playing. The more I dig into it, the more I like it. Despite the fact that I recently posted a transcription of one of Keith’s licks, his playing is less lick based than many successful drummers.

In fact, his notions and uniqueness truly seem to have evolved from an understanding of jazz drumming and the melodic interplay between the snare drum and bass drum that jazz drummers rely on in their time keeping.

Keith is one of the first of a breed of modern drummers who has successfully melded the old and new and applied these traditional jazz concepts to rock and pop directly. That notion excites me tremendously. Steve Gadd was possibly the first drummer to do this….a real jazzer, Gadd kept getting called for big pop gigs….so why would you say “no”? He didn’t. And, of course, neither does Keith.

So I’ve plunked down my one hundred bucks and I’m going to this masterclass. Come join me…as of this writing, there are five spots left.