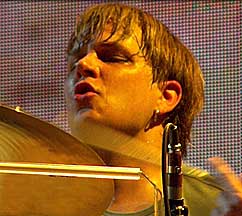 This is a great lick that Keith uses a lot. It sounds huge and sweeping and awesome. It requires great technique to execute properly. Your double strokes and foot technique must be in great shape for this to work. Getting your paradiddle-diddle in order will help you too.

The idea for this transcription came from me running into a great drummer, Paul Davis, who has a drum practice space near me. If you don’t know who Paul is, you should—he is a fantastic drummer and currently holds the chair for the Broadway show “Newsies.” 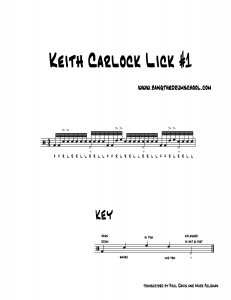 We were talking about drumming, as usual, and we somehow started talking about Keith, and this lick came up. Paul had a copy of the DVD “Fills and Chops” in his practice room, and we went up there to take a look at this lick. A couple of days later, we compared notes and Presto! Here is your transcription.

If you have the DVD, the transcription comes right after Keith explains that he is going to “Try a few examples,” and then he plays three measures of groove, followed by what is transcribed on the included PDF. The tempo is approximately 103 bpm.

Have fun….it’s a great lick.