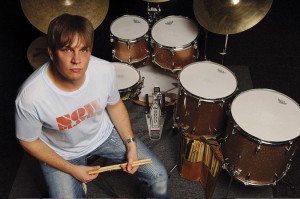 We long to hear something new and exciting. Steve Gadd gave us that when he burst onto the scene with Chick Corea.

Vinnie Colaiuta did it again a bit later.

But before all of these greats, and what inspires and informs much of the greatness and newness of these revolutionary drum set musicians are the jazz drummers who preceded them.

Listen to Gadd talk about who influenced him and he’ll talk about Philly Joe Jones, Elvin Jones and Tony Williams. But he added his own twist…. He innovated.

Clark Terry, the great jazz trumpeter, summed up the process of becoming a great musician in three short words:

What a concise and beautiful summary of the creative process.

When I was studying with the great John Riley, he asked me to learn several solos by the jazz greats that inspired me and then mess around with the ideas to come up with new things. The last extra step—the part where one innovates —is crucial.

Copy cats who don’t twist and turn the ideas into new ones are doomed to failure. Why would I care that you can play like Vinnie when I can listen to the real Vinnie?

Sure it takes great skill to accurately copy the masters, but what separates the men from the boys is innovation.

The most dramatic drum set innovator of the last ten years is Keith Carlock. The reason is that he has taken funk and jazz and rolled them up into one absolutely contemporary approach. His sound is based firmly on the past: open tuning, heavy dark cymbals, a proliferation of double stroke rolls. And yet, the way he puts everything together is completely fresh and new sounding.

His sound must be resonating because he’s been hired by Sting, Steely Dan, and James Taylor, just to name a few.

He has taken the ideas inherent in the time keeping methods of jazz and applied them to pop and rock. That is the real key. Keith studied Weckl and Vinnie and then he rejected them. He understood that trying to sound like that was a huge mistake. You will never hear Keith play a linear beat. And why would he? Linear playing is so ’80s….

Instead, he creates wonderful conversations between his bass drum and snare and hi-hat, all while playing straight eighth notes with his cymbal hand.

He has become the Elvin Jones of the new millennium.

Thank god he arrived. We needed something new.