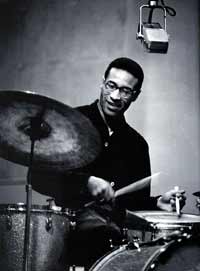 Many of the world’s best known and most highly regarded rock drummers have been profoundly influenced by great jazz drummers. John Bonham was a Buddy Rich fanatic. So is Neil Peart. Neil is also a Max fan and has written about how Max Roach’s classic jazz solo, “The Drum Also Waltzes,” has influenced him. He also demonstrates it in his educational video, “A Work In Progress.” There are licks that drummers attribute to John Bonham that actually have their roots in the playing of Buddy Rich and Elvin Jones.

Inspiration can come in many forms and great drumming inspires me regardless of genre. That being said, I’ve consistently found that jazz drumming concepts can be applied to rock drumming with impressive results. It takes hard work to dissect the playing of the jazz greats, but you’ll get a leg up on the competition if you steal from the jazz masters because most of your competition won’t take the time or put in the effort to find these nuggets of inspiration that can inform their rock drumming.

Luckily for you, BANG! has done the hard work for you on this one. To get started, download the pdf of the worksheet containing these fills by clicking on the link to the right: Max Roach Inspired Rock Fills

The fills on this worksheet are based on a single idea that I’ve heard in some of Max Roach’s solos. The concept here is that playing single strokes in groups of three results in a unique way to move around the drum set. On a four piece kit, the configuration for which these exercises were written, playing groups of three as single strokes allows you to move from drum to drum, continuously, from left to right and then back from right to left. If you try the first three exercises, which are written in triplets, you’ll see what I mean. You can repeat each of the exercises numbered 1 to 3 continuously and you’ll be playing a flow of triplets that moves up and down the drum kit. 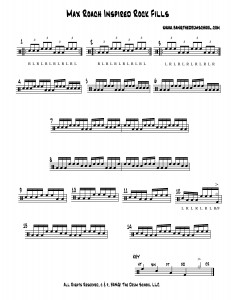 Exercises 4 through 14 take this notion and apply it to 16th notes, which is a more common rhythm to play in rock fills. With the exception of #12, all the 16th fills shown start with the right hand and the sticking alternates as singles: RLR LRL RLR, etc….

More often than not, I hear rock drummers playing in groups of two and four, so using ideas like these in your playing will help you sound different from the rest of the drummers out there….and being unique is the name of the game.