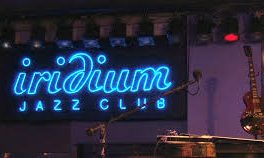 Many of the drum world’s heavy hitters are playing in the NYC area in the upcoming weeks and months. Interesting to note–all of these shows are taking place at NYC’s Iridium–in Times Square. Do you want to hear the big boys play? Of course you do! Here’s a guide: Aug 29th and 30th Vigil Donati […] 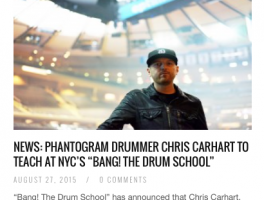 It was exciting to see that Modern Drummmer magazine picked up on the story about our new Artists-In-Residence program and the fact that Chris Carhart, PHANTOGRAM’s drummer, is our first appointment. There is a great shot of Chris at Madison Square Garden and a quote from me (Mark Feldman) included in their News story. For […]

BANG! The Drum School (www.bangthedrumschool.com) announced that Chris Carhart, the drummer for Phantogram, would be teaching as part of the school’s new Artists In Residence program. The new program is meant to bring the teaching expertise of internationally known drummers to the curriculum of drum lessons offered at BANG’s NYC studios. According to BANG’s founder, […]

BANG! The Drum School (www.bangthedrumschool.com) announced today that drummer Mickey Vershbow had been promoted to Studio Manager. Mark Feldman, BANG! The Drum School’s founder, said: “Mickey is a talented drummer as well as a gifted instructor. It is with great pleasure that I announce her promotion to Studio Manager. In her new role, Mickey will […]