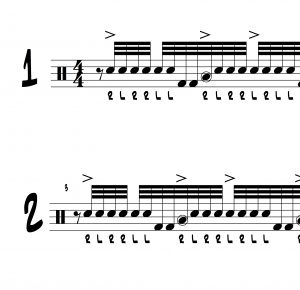 I’ve been working on a solo over a vamp. The vamp (a four bar phrase) played by the guitar player and bassist is based on sixteenth notes and there are two places within it that beg to be “hit” by the drummer: the “and” of “four” in bar two, and the “e” of “four” in bar four. To let the phrase breathe just a little, the ideas I’ve been messing around with begin on the “and” of “1.” And those ideas are presented here for your enjoyment as “Nasty Lick #72”

If you have a look at the PDF of Nasty Lick #72, you’ll that those rhythmic parameters are met in exercises 1 and 2 on the worksheet. Here it is the link to the PDF for you to download: Nasty Lick 72

The vamp goes on for a while and I wanted some new ideas I could use that would allow me to really shred (32nd notes at 96 bpm) but that would also have interesting phrases. Combining paradiddles, paradiddle-diddles and groups of two bass drum notes seemed like some deep fodder for new material.

This has not been tested in the kitchen yet, but I’m off to the practice room as soon as I publish this post.

Check out the PDF and see if it stimulates some new ideas for you.