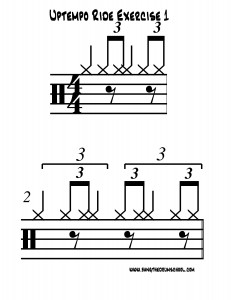 Here is an exercise I’ve been using to help me work on my uptempo ride technique. Using this method, rather than randomly speeding up and slowing down to work on your speed, you’ll have a way to systematically and gradually move in and out of the uptempo pattern while maintaining a pulse. By doing so, you can work towards a specific tempo goal for your uptempo ride pattern and take methodical steps to get there, while simultaneously working on your groove. Sound confusing? Let me explain.

The exercise starts at one specific tempo, and ultimately doubles it (that is the uptempo part). On the way to doubling the original tempo, you superimpose six over four so you have a middle step tempo wise to getting there. Once you get comfortable moving back and forth between these three versions of the ride pattern, you’ll have a useful tool that allows you to get some rest from the uptempo pattern. The exercise will also allow you to hear how your phrasing and articulation sound at three different tempos that are all based mathematically on the original “slow” tempo.

I usually use a metronome when I work on this, and I suggest you do the same. The trickiest part is the superimposition of six over four. The way to think of this is to use quarter note triplets as the new pulse and then use that quarter note triplet pulse to play the ride pattern. You’ll see that pretty clearly in the PDF of the exercise. When you get to the uptempo portion, you’ll see that it is written as sixteenths, which is the “correct” interpretation of the phrase at a faster tempo (ie…bpm of at least 280).

In order to get started, figure out your current maximum tempo for the ride cymbal pattern and divide that number in half. That will be your beginning tempo for the exercise. Here is the PDF of the exercise for you to download and take to the practice room: Uptempo Ride Exercise 1 PDF

By the way, I got the idea for this from a ride cymbal exercise that John Riley included in his DVD, “The Master Drummer.” In his exercise, John starts with the ride pattern and works up to a quadrupled version of the time….great exercise….and a great DVD.