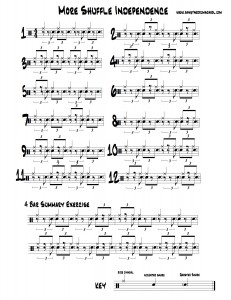 I’ve written about this before, but I decided that my original entry on this topic was somewhat lacking. Hence, a more complete look at this idea. The original is here, “7 Steps To Shuffle Independence,” just for reference, but you actually needn’t go there–everything that is there is also in this updated version (with more added).

The idea is to have more freedom with the ride cymbal while playing shuffles. The relationship between shuffles and jazz time keeping is evident, but I never had a way to comfortably overlap the two in my playing. This worksheet, with a dozen exercises, seeks to remedy that.

The pattern described above is what appears throughout the worksheet on the snare line. The “lets” on the snare are all ghosted, and the back beats are all accented.

The rest of the worksheet is just cymbal variations that are typical of jazz time playing.

For clarity, I left the bass drum and hi-hat lines out of these exercises, but I would play quarters with your bass drum and two and four with your hi-hat foot through out.

It bears mentioning that once you develop the ability to do this seamlessly you use the ideas sparingly and with good taste.