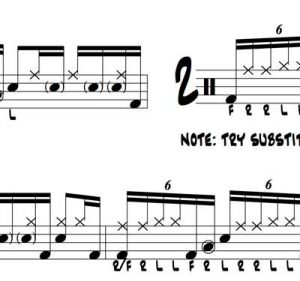 Yesterday I was in the drum room for about five hours and I was working on and practicing several things. I’ve been working on Dave DiCenso’s material, which I think is transformative. I’ll write more about that later, but in the meantime, if you’re interested, you can read an earlier article I wrote about one of his two books here: Dave DiCenso’s Rhythm and Drumming Demystified.

The other thing I was working on became “Nasty Lick #106.” You can download the PDF with the fully transcribed notation and details here: Nasty Drum Lick #106.

Nasty #106 comes from a simple idea that I’ve been messing around with for a while now; a five note pattern that I sometimes call “4 up/1 down” which means four notes with the hands followed by one with the foot. In this case, I used double strokes for the sticking with the hands.

Anyway, check it out. I think it sounds really cool.