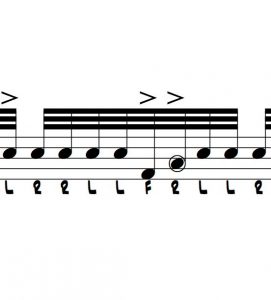 This week, I was messing around with my double stroke roll. I wanted to come up with a new way of breaking it up on the kit. Sometimes the simplest idea of this type is to substitute “something else” for one or more notes of an existing pattern. In this case, I wanted to maintain the flow of the roll, but occasionally substitute some other drums for one of the doubles. I wanted to be able to make that substitution for either a double left or double right.

This is just the germ of the idea, but it’s a solid one. These substitutions can be made for either your left or right hand’s doubles and they can be made on any of them which means rhythmically, the combinations are pretty much endless. That’s what gives this idea power; it’s flexible and once you have some facility with it, you should be able to improvise with the concept on your own.

So, Nasty Lick #107 stands on its own, but it is just the tip of the iceberg. Start messing with moving the substitutions around and you’ll find there’s much you can do. Have fun!