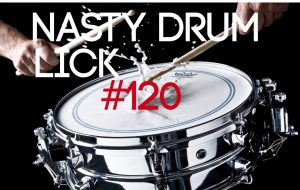 As usual, my practice sessions give me ideas for these “Nasty Drum Lick” posts. For a while now, I’ve been messing with lots of 32nd note ideas. I’ve really been trying to expand my command of playing fast 32nd note ideas that incorporate the snare and hand/foot combos.

I also lean heavily towards ideas that sound like they might be in the realm of what my favorite drummers play when they go into “beast mode.” I just know those ideas when I hear them because I’ve spent so much time listening to and analyzing those players.

Oh, and who are they, you ask? Well, it won’t surprise you to know that Vinnie Colaiuta and Dave DiCenso are pretty high up on that list.

This week I began to dig into some more ideas that involve the following five note grouping: Foot-Right-Left-Foot-Right. You’ll see on the PDF how I place that grouping within other notes on the snare drum such that it creates interesting phrases.

Just a bit more detail on how I mix that hand/foot pattern in with the snare drum. Most of what you’ll see on the PDF is paradiddles and paradiddle-diddles. There are also two other cool little tricks that I like.

The first is something I call the “Inverted 9 Stroke Roll,” which you’ll see on beat “4” of example one. The sticking is LRLLRRLL. That allows a real roll to be played with a big accent on the first note. I sometimes use the reverse of that sticking too: RLRRLLRR. I’ve written about this before HERE.

The second little trick is the series of eight notes at the end of example #2. It’s a great pattern that mixes single strokes with two strategically placed bass drum notes. It sounds great, and is easy to play fast. Try it and I think you’ll see what I mean.

If you’ve been reading this and you’re a bit confused, nothing will explain this quite like having you look at the PDF so you know exactly what I’m talking about. So here it is: Nasty Lick 120

Have fun with this. Let me know how it goes and feel free to ask me any questions.