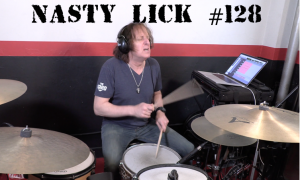 Last week I posted a video of my playing along with Gary Husband’s song, “Groove Grease.” There’s an eight bar solo in the song and I’ve been getting asked about one of the ideas I played in that solo. Hence, Nasty Drum Lick #128 was born!

The idea is a sixteenth note triplet phrase that uses a six-stroke roll with two bass drum notes and one tom note thrown in.

Watch the video (it’s only 1:11) and the lick we’re talking about today is played three times beginning at :27 into the video. You won’t be able to miss it because text appears on the screen saying “THIS IS THE LICK” when I’m playing it, and that text disappears when I start playing a different idea.

Now, here’s the PDF with the lick written out, note-for-note including sticking: