The guts of Nasty Lick #75, presented here, came from a very simple 16th note lick I’ve been playing for a very long time (the sticking is “RLRL”), shown below:

The new version came from simply adding bass drum notes before and after the existing idea, giving us “FRLRLF:” 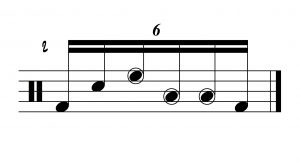 Then, I came up with a few ideas I like based on that “germ,” all of which are included on the attached PDF for your practicing pleasure.

You can download the PDF of “Nasty Lick #75” at the link to the right: Nasty Lick 75. I promise you, there is good stuff on this worksheet. Check it out.