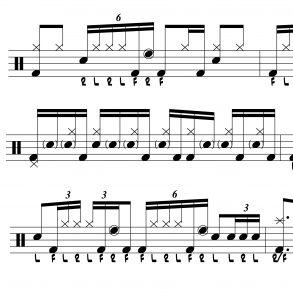 Way back in the beginning of “The Drumming Blog,” I wrote a piece about getting the most out of your ideas. The article is called “Milking Your Licks Dry,” and it explores the notion of taking ideas you already know and figuring out new ways to use them.

With Nasty Lick 79, I took a linear pattern I’ve been using for years and twisted it around a bit. The original linear pattern can be found in the article, “A Cool Chaffee-ish Linear Triplet Groove,” also found elsewhere in this blog.

With this new lick, I wanted something that I could just drop into a groove anytime I wanted to. It needed to “speed things up,” come out of nowhere, and then drop back into the groove. The original version of Nasty Lick 79 appears in example #1 on the PDF, and it sounds like a gospel chops thing.

But of course, once I started to mess around with it, I found lots of other ways to play it. That is what the other examples at the top of the PDF represent. Examples 2 and 3 are each a slightly different version of Nasty Lick 79.

When you get to the “Eight Bar Groove Solo” on the PDF, you’ll get a sense of some of the ways I’ve found to use these different versions within a groove.

So, have a look at the PDF, print it out, and take it to the practice room. Here’s the PDF: Nasty Lick 79