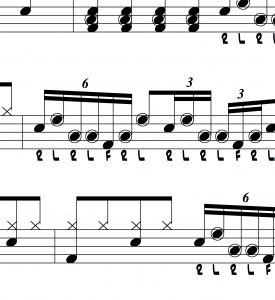 This little sextuplet combo sounds fabulous and is easy to work up to gloriously blazing speed.  It’s based on a common move around the drums that many of you are already familiar with, but it adds one bass drum note in an interesting place.  The PDF has five examples: the first two are slightly different versions of the lick and the last three are some ideas on how to use it.

Example three shows how to use the lick in a common rock or pop situation: a short eighth note build that ends in a stop on beat four. Example four is a fun one measure fill and example five is two beat fill idea.

There’s not that much else to say except here’s the PDF: nasty lick #80