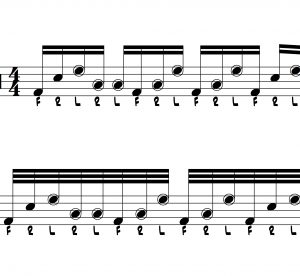 I’ve been working on some ideas for some solos in my new band, LEVEL5, and that’s led to combining some ideas you’ve seen here recently on the blog. In Nasty Lick #81, we combine groups of five and groups of 3 between the hands and feet.

When these are combined in different ways, some cool sounding stuff starts to happen!

There are four examples on the PDF. The first example is a one measure idea as 16th notes, and the second is the same idea as 32nds. To begin the lick, I add a single bass drum note to the beginning of the five note grouping, followed by two of the three note groupings and then the five minus the last bass drum.

The third and fourth examples add another quarter note worth of 32nds and then two different ways to “get out” using 16ths. I know this sounds complicated, but the PDF will make things clear. Have at it!!