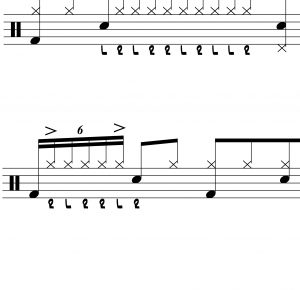 This one just happened yesterday in the practice room. I saw some random video on Instagram. I don’t remember the drummer’s name, but I loved the idea he was playing which was a groove with some tasty 16th note triplet ideas thrown in on the hi-hat. I’ll have to go back and find it again and transcribe it later, but in the meantime, I was inspired and had to come up with a few ideas like that.

So here they are, just two different ideas based on paradiddles played as 16th note triplets and incorporated into a simple groove.