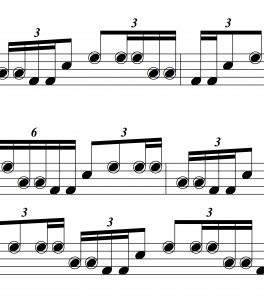 The other day I was listening to some Virgil Donati. I have a Virgil playlist in iTunes and it was on “shuffle.” The rhythm of Nasty Lick #83 comes from one of Virgil’s fills. I can’t remember what track it was, but Virgil played two versions of that fill on it.

If you recognize the rhythm and want to tell me what song it’s from, please comment on the post.

The rhythm really stuck with me–it’s not an obvious phrase–which is, of course, one of the great things about Virgil. He plays crazy sounding and unusual phrases, which is one of the reasons I love his playing so much.

Anyway, I went to the practice room and I re-orchestrated the idea I heard on some different drums. Mainly I added toms to the mix–the original Virgil version included just snare and bass drum. The result of the re-orchestration is presented for your perusal on the PDF: Nasty Lick #83

A little about what’s on the PDF follows. Examples #1 and #2 are both based on the same pattern but begin in different parts of the phrase. Example #3 presents you with the idea phrased over five measures. It takes five measures to resolve the lick, so by looking at #3, you can pick any place you want to start the phrase and understand the best ways to get in and out of the lick. This way at looking at drumming patterns is discussed in more detail in the post entitled “Pattern Control: An Introduction”

OK. Have at it…I’m working on it too.