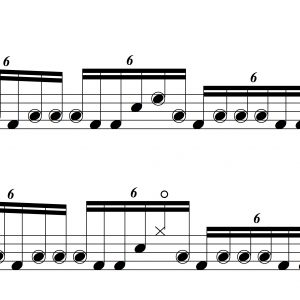 This one is a nine note idea: RLRF RLRFF, and we’re going to play it as 16th note triplets.

The attached worksheet will spell it all out for you using three examples. In the first, we’ll just look at the pattern itself with no real orchestration–hands on the snare and foot on the bass drum. With example two, we’ll use a sort of obvious, but never-the-less, great sounding orchestration including the toms.

Finally, with example three, we’ll add a little extra something in the orchestration department–our left hand will move over to the hi-hat on the 2nd note of the 9 note pattern, crashing the hi-hats. In order to get the right sound, our left foot has to allow the hats to rest against each other loosely so that they’ll get a nice washy sound when we crash them.

It’s a cool sounding little lick. Here’s the PDF: Nasty Lick 84. Let me know if you like it.