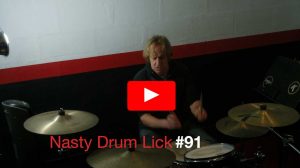 Here’s an awesome sounding new drum lick that demonstrates a notion I write and talk about often: using “connectors” in your soloing and fills. Usually, a connector is a rudiment or is based on a rudiment, and it is used to attach ideas to each other.

In this case, the idea we’re connecting is a Max Roach inspired pattern that I use frequently. In solos, Max would sometimes play three notes as singles on the floor tom (beginning with the right hand) and then move to the high tom and play another three notes. I love moving in this counter-clockwise direction on the drum set; it sounds so different from the typical clockwise motion that many drummers use.

At this point, it will be helpful to have a look at the PDF with the rhythmic notation for Nasty Drum Lick 91. You can download it by clicking HERE.

Notice that the connector is simply a right-hand leading paradiddle-diddle.

VIDEO UPDATE! Here is a video demonstration of #91. I begin by playing the sticking around the kit slowly (download the PDF to see the exact sticking and rhythmic notation) and then demonstrate some ways of playing the lick in context (coming in and out of a groove). I also play the idea as 32nd notes near the end of the video–that will be more fully explored in Nasty Drum Lick #91A, coming soon.

Ok, have at it! Questions welcomed.