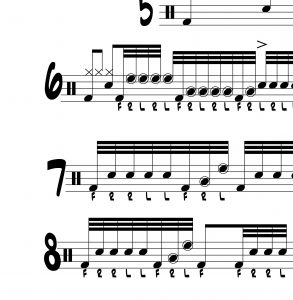 Lately, I’ve been experimenting with the following five note pattern: RLRLF. You may have read about it before here on “The Drumming Blog,” as I’ve posted about its use as 16th note triplets (more details on that later). To go deeper, let’s bust out the 32nd notes.

The eight exercises on the PDF show you the “keepers” from my practice with “RLRLF” as 32nds (I should add “so far” because I’m not done, I think there’s more there that I’ve haven’t discovered yet). Note that there are plenty of other “RLRLF” ideas that were rejected. That’s part of the method that I recommend. Find an idea that you like, and go deep. Rotate the pattern through different rhythmic metrics. Within each metric devote practice time to experimentation with the pattern. In turn, that experimentation will get you loads of ideas; some good and some bad. You’ll simply reject the bad ones and go deeper on the good ones. That’s how I got to these eight.

Take it into the practice room and get into it. I promise to get a video of this stuff posted shortly.