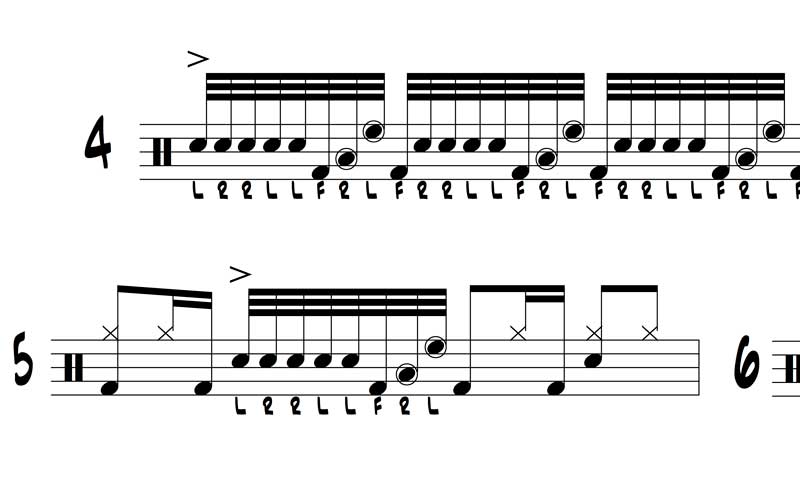 Here is new idea that can be used as a drum fill, a way to spice up a groove, or as some soloing vocabulary. Do you remember Steve Gadd’s famous ratamacue fill? Well, if not, you can check it out on this worksheet I wrote about some of Gadd’s vocabulary called, “7 Gadd Licks.” You can read the full article at the link, but the rhythmic notation is here in this PDF:7 Gadd Licks PDF

Look at #4 on the Gadd licks PDF. That’s the ratamacue lick. It’s one that Steve plays a lot in solos. I’ve always loved that lick, but I stopped playing it and started searching for an alternative; something that had that flavor but belonged to me. Happily, a few weeks ago, I found my answer.

It has a similar flavor as Gadd’s ratamacue, but it is a 32nd note idea (Steve’s is a triplet based lick).

Let me give you a little run down of what’s on the PDF. There are eight exercises. The first three detail the “germs” of the idea: 3 versions of the lick that vary slightly. Then, #4 shows how you can play the idea continuously for a full measure. Examples 5 and 6 show you ways to just throw it into a groove. Number 7 shows you another idea for phrasing a bit differently. Finally, #8 gives you a way to combine #99 with the earlier Nasty Lick #98.

Alright. That’s all for now. Let me know what you think; comments and questions are always welcomed.