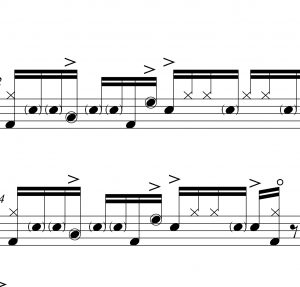 Once you’ve been bitten by the linear drumming bug, it’s hard to find a cure. This groove is an example of the fun and slickness that ensues from the pursuit of this drumming style. Once you learn a pattern, moving your hands to different parts of the kit almost always results in something that sounds cool. That’s what happened here. A little background below…

I am working on a new project, my very own band called “LEVEL5.” The recording I’m working on includes two drum solo sections, and in one of them, I solo over a funky 16th note vamp. I’ve been working on a drum solo for that section, and one of my ideas was to groove for part of it, but the groove needed a little spice and busy-ness. It’s a solo section, after all. A good solution? Some type of linear groove, of course.

So here it is. The PDF: nasty_groove_4

PS – I ultimately rejected this for the solo, but the reason was that I felt that the groove didn’t work well enough due to the tempo of the song (100 bpm). IMO, this groove sounds really good at tempos around 120 bpm or more. But the groove was too cool to discard, it just didn’t work for that tune/purpose.