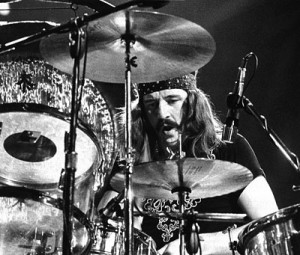 Here’s a classic Bonham lick. It is the main pattern that Bonham plays over and over in the mini solo at the end of Zep’s “Rock and Roll.” It’s not that difficult….just a little twist on a fairly common lick that Bonham used a lot. At a recent gig with my rock band MANCIE, I played the “Rock and Roll” solo note for note just for fun, and someone came up to me after the show and asked me, “wasn’t that the Bonham solo from Rock and Roll?!”

My point isn’t to brag that I can play it, but rather that it is a lick that music freak types will remember and recognize when you play it. That recognition and memory from the audience makes it all the more exciting for me to play sometimes….hopefully you will have similar experiences.

You can download the PDF here: Nasty Lick 34 PDF