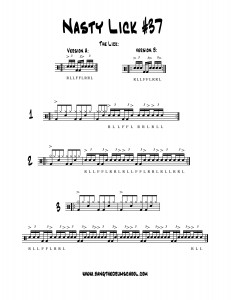 This Nasty Lick is based on a six stroke roll, but with some bass drum thrown in. It comes from something I’ve heard Dave Weckl do a lot, but I’ve added an extra triplet at the end of the phrase to make it a nine note grouping….I like the way that makes it move around and over the barline when it repeats.

There are two versions of the lick shown, but the difference is only about the accents: in version A there is one less accent than in version B. I use B more often, so I chose to illustrate the lick in context (see examples 1, 2 and 3) by using B. Note that although the pattern is shown as played only on the snare and bass drum you should try moving the accented notes from the snare to the toms. My favorite orchestration of the lick is to move the left hand that follows the two bass drum notes up to the high tom and leave my hands on the snare for the rest. But try different stuff out….you’ll find something new that works for you.

The sticking is given, and the lick is transcribed note for note, so there’s not much more to say…..except…have at it!!!