I am about to give you one of my Nastiest of the Nasty Licks!!! Nasty Lick #38 is one of my favorites. It pretty much ALWAYS gets a reaction. Just check out the screams from the audience when I launch into it in the video below. It’s a live video of my rock band MANCIE playing at Spike Hill in Brooklyn, NY in November of 2011. 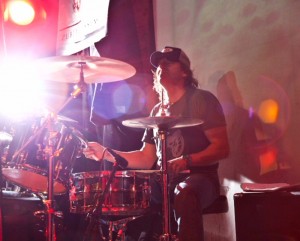 It’s a cool song and the band is great, so check it out. But if you want to go right to the drum solo, it begins at around 2:52 in the video.

I begin with some rudimental type stuff on the snare, work in some hand/foot combinations, and then launch into Nasty Lick #38. You can skip directly to Nasty Lick #38 by going to 3:03 in the video.

Alright! Want to know how to do that? Just print out the PDF by clicking here: Nasty Lick 38 PDF

The lick as played in the video is written out in example #1. The pattern—three groups of five notes–is played a total of five times. I move counter clockwise around the drums, with the first note of each group of five on a different drum: 1) snare, 2) floor tom, 3) high tom.

That accented note is followed by two ghost notes with the left hand and then two fast bass drum notes. Note that at this part of the solo, the time is “free.” I’m just going off, playing the lick a bunch of times and then improvising as I see fit. It’s an open solo, so playing “freely” is always an option. I cue the band to come back in, so I don’t have to worry about the pulse.

Example #2 is another way to use the lick that I rely on frequently. This time, we play completely in time. In this case, each group of five takes up the space of three 16th notes. I’ve included a measure of accented 16th notes below the lick so you can see how the phrasing lines up. The first note of each group of five lines up with the 16th notes shown below example #2 as follows: 1) the “1,”2) the “a” of “1,” 3) the “and” of “2,” 4) the “e” of “3.” Finally, you can easily resolve the lick by playing an accented note on beat four with your right hand.

Let Me Know What You Think!

I want to hear from you! Please leave comments here on the blog so you can ask questions, give your opinion, or tell me how you are using this lick….