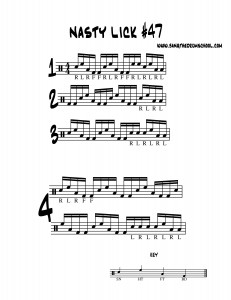 Here’s an old favorite of mine. It’s a five note pattern: three with the hands (RLR) and two with bass drum (FF). In this instance, we apply the five notes as 16th notes. The pattern is distributed around the kit like so: Right hand on the snare, Left hand on the hi tom, Right hand on the floor tom, and then two bass drum notes with your foot.

The work sheet contains four different applications of the pattern, each of which is designed for you to play as a fill or a break and be able to begin the next measure of time playing with a right hand.

Note that 1 and 3 are almost exactly the same; the only difference is that the “and” and “a” of “three” are moved from the hi tom to the snare in #3. That small change makes a big difference, but I love the way both versions sound.

In 2, we start the pattern with the foot, but that allows us to gracefully exit with one of my favorite four note 16th patterns beginning on beat “four.”

Finally, in 4, we go over the bar line with a two measure fill. Note that you have to begin the last seven single strokes with your left hand in order to get out of the fill gracefully.