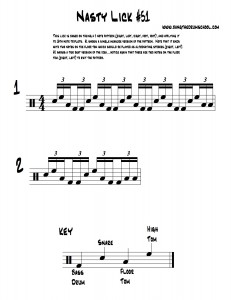 This lick is based on a five note pattern: three hands and two feet (right, left, right, foot, foot). I’ve used this primarily as a sixteenth note based idea, but recently I started experimenting with applying it as 16th note triplets. I like how this sounds when it’s played fast: ie in the neighborhood of 100 bpms and above. See what you think and let me know.