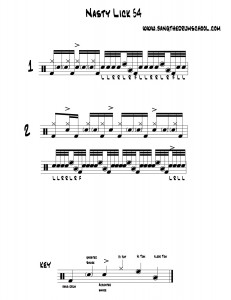 I’ve been trying to come up with some new thirty-second note ideas that rely heavily on double stroke rolls on the snare, but mix in toms and bass drum notes.

Here’s one that I like. And because it is a 7 note idea, it moves around the bar in an interesting way.

The worksheet has two examples. Number one is the half measure version and number two is the whole measure version. Both examples have grooves included just for fun, but the grooves are just window dressing.