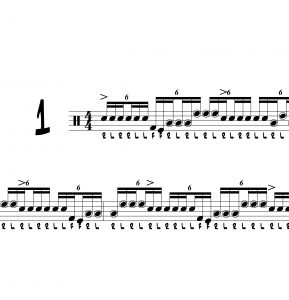 Lately, I’ve been combining patterns that I am already very comfortable with into new ideas. The theory here is that the new combinations will be fairly easy to get into “playing” shape. I already know these these words/ideas, so the new ways of mixing and matching them should take less practice time to become “performance-ready.” Logical, right? The theory seems to work.

In this case, the ideas/words I combined were:
1) the paradiddle diddle
2) two bass drum notes in a row
3) two groups of three on the toms, going low to high

I took these and mixed them together as sixteenth note triplets.

Nasty Lick 70 also works when you convert it to thirty-second notes…..