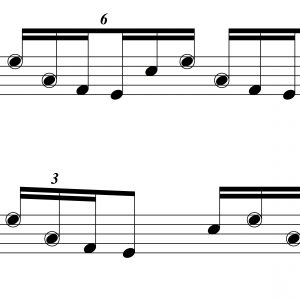 This one is a new variation on an idea I like a lot. I have used this five note pattern, “R L R F F,” as sixteenth notes in the past, but recently I started experimenting with using it as triplets. I’m digging how it sounds, so here are a couple of ways to try it.

The first one is just continuous sixteenth note triplets. In order to “get out” of the pattern and back to the groove with my right hand landing on “one,” I just play “R L R L” as the last four notes. If this sounds confusing, just open the PDF and look at example #1 and all will become clear.

Example #2 is another idea that I stumbled on and really liked. This time the phrase is not continuous. Something about it reminds me of Bonham; it is so rock sounding….something that you might play at the end of a tune for a mini solo a la Zeppelin’s “Rock and Roll.”

Here is the PDF for you to download: nasty_lick_71

And by the way, I’ve notated the two bass drum notes as being played on a double pedal, but obviously feel free to play it on a single pedal if that is your preference.

Have at it and let me know your thoughts.