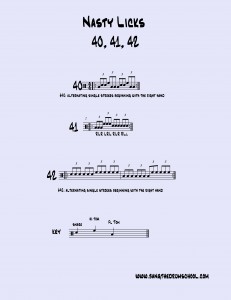 The first lick, #40 is one I’ve heard Gadd play. Repeat it a bunch of times continuously. It will sound great that way. Notice the repeat signs around the measure. The lick itself is two beats long and the one measure example shows the lick played twice…but keep it going even longer.

Finally, #42 is one I came up with to go around the drums clockwise, and then come back in the other direction. Repeat the two measures over and over. The trick here is to play one additional note on the floor tom in order to allow you to come back around the drums counter clockwise (see beat 3 in measure 2!). Have fun and please use them for good instead of evil (ie use them musically and in good taste).

Print out the PDF here: Nasty Licks 40 through 42