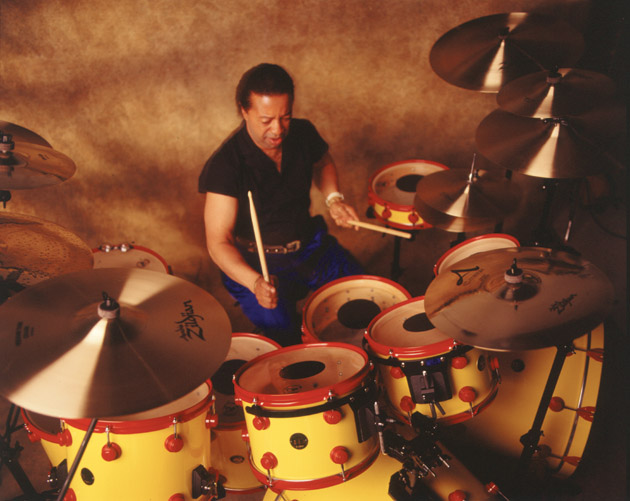 I’ve experimented with playing a double pedal for over twenty years. My facility with it, and my commitment to the technique is nothing compared to the masters. Frankly, the only drummer on the planet whom I consider to be a true master of double bass is Virgil Donati. There are many great double bass drummers, but no one can touch Virgil.

I always believed that double pedal had merit. Over the years, I’ve used it in my playing, albeit sparingly.

For the past three years or so, I put my double pedal in the closet. I chose to do that because I was into a minimalist concept on the drums. My thinking at the time was that I should use a drum set up similar to those of the jazz greats. Drummers like Philly Joe Jones and Buddy Rich come to mind. Here are two (there are many others) who could absolutely destroy on a four piece kit with two cymbals and a hi hat. One bass drum.

That thinking is logical and it is reinforced by observing other current greats like Jojo Mayer and Keith Carlock. Clearly, one can go very far by developing a deep and pristine hand technique and foot technique on one bass drum.

But ultimately, I now believe that stance is limiting.

I think a lot of it had to do with hearing some great drummers who use double bass with taste to add spice and power to their playing. Check out how Steve Smith, Gregg Bissonette, Neil Peart, Dennis Chambers and Glen Sobel use the double pedal. I recently (August 2015) saw Glen with Alice Cooper and he blew me away. Such power and speed. Glen and the others named above aren’t typically heard playing beats with continuous bass drum rolls (not that there’s anything wrong with that). More often, I hear players like this make more strategic use of two bass drums. Two, three, four or maybe five notes in a row is what I consider a more strategic way of using the double pedal.

These small bursts with two feet can add a huge amount of variety and power to one’s playing–particularly when mixed into what the hands are doing. That’s the way I like to use the double pedal.

It has become pretty clear to me that playing multiple consecutive bass drum notes with speed, consistency and power is only possible using two feet. In fact, the previous sentence expresses something that seems so obvious that it actually feels kind of idiotic to even state it. So why fight it?

The double pedal is back and I’m shedding it.

And if it helps excite you about the concept, how about the anecdotal evidence that Tony Williams was exploring double bass shortly before his death? Just check out the photo above of Tony with his massive DW double bass kit. Ignore the colors (ha ha that’s one ugly color combination), and just imagine how amazing it would have been if we’d gotten the chance to hear what Tony would have done with two bass drums…