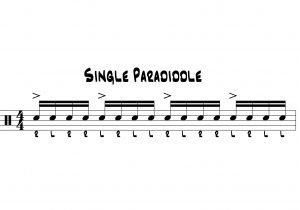 For beginners, here is the first in a series of Cheat Sheets.

This one covers what I consider to be the three most important paradiddle patterns for beginners to learn:

The first order of business is to learn these hand patterns cold. Don’t worry about speed at first, just get to the point where you can play the pattern itself effortlessly and at will, without any papers to look at when playing. For now, forget about the accents. The little symbol that looks like an arrow above some of the notes means to play that note louder. Ignore those symbols at first. Just learn the hand patterns.

After you can play the patterns pretty well, try playing the accented notes louder than the unaccented notes. You should be able to play each pattern with or without the accents.

Later, we’ll mess around with moving the accents around to different places. But for now, just learn these. They will serve you well.