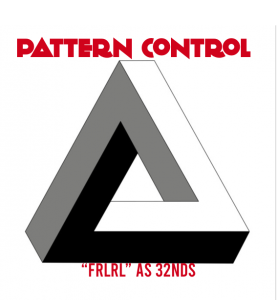 Pattern Control is a concept/method I use often to understand drumming ideas I come up with (or steal). I’ve found it very useful, so I want to share the latest drumming pattern I’ve examined using the method.

Pattern Control allows you to examine how a sticking or hand/foot idea plays out in a particular subdivision continuously until it resolves. Once the pattern is written out this way, you can look at the measures and pick out chunks that are useful to you.

I measure usefulness by whether the sticking allows me to get “in and out” of a fill and back to something else (like the groove).

For a while now, I’ve been using a pattern I first heard Vinnie Colaiuta play on the Warren Cuccurullo album, Thanks to Frank. The track is “Indian Time Zones.” Vinnie takes a solo and uses the five-note pattern RLRLF (translation: right, left, right, left, foot).

Note that it doesn’t matter whether you start the pattern with your right hand or with your foot because RLRLF and FRLRL are exactly the same upon repeating.

Below I offer you the PDF that digs into this pattern as 32nd notes. It takes five measures in 4/4 for the pattern to resolve. I’ve presented the pattern two ways; both without and with the hi-hat on quarter notes. I like the option of playing the hi-hat on the quarters so that the listener and your fellow musicians have a reference point to where the time is. The hi-hat also helps you to understand the pattern while you’re practicing.

Note that there are no orchestrations–I leave that up to you.

In order to understand the pattern, I recommend playing the entire five measures repeatedly with a metronome while counting the 16th note subdivisions. Experiment with orchestrations until you find some that you like.

Then, pick some chunks that you want to use–think about things you could play for one quarter note, or two quarters etc. You can use these as fills or vocabulary for a solo.

Allow me to give you one of the nuggets that I’ve pulled out of this Pattern Control exercise.

If I wanted to play a one bar fill, the fifth measure would work quite nicely. You can see why; it begins and ends quite gracefully with your hands playing “RL” or “RLRL” respectively, and this allows you to play the pattern and crash on one easily.

Notice that you probably wouldn’t just come up with this off the top of your head. Going through the work of writing the pattern out in the chosen subdivision until it resolves allows us to see and then choose pieces of the pattern that you might not think of otherwise. Once you pick something like this, you simply practice it until you can do it easily.

There are many other useful chunks you can extract from this worksheet, just look for them and you’ll find stuff you can use.

I hope you find this helpful. Let me know your thoughts in the comments section.