The Concept of “Pattern Control”

A large amount of musical vocabulary is created through the use of patterns. Much of the time, a great pattern is discovered by listening to our favorite musicians. Many of the best musicians have certain phrases or patterns that they use over and over again, sometimes in many different ways. Steve Gadd and Philly Joe Jones come to mind as drummers who do this very well.

Once I find a pattern that I think sounds great, I want to use it a lot, so I try to figure out different ways to play it. I realized that the following two methods will yield endless possibilities to use a pattern you like: 1) rotating a pattern through different rhythmic metrics and 2) orchestrating a pattern on different sound sources on the drumset.

Part of the power of the concept of using these patterns is that altering the rhythmic metric or the sound source will create ideas that sound radically different from one another.

Now, here’s the powerful part: you really are only using one single idea that you’ve mastered, and that you know sounds great. Once you can play the pattern and recognize it as one that you like, you can go to town with the variations, and it is really not that difficult to do so. But to the listener, you are playing things that sound completely different. So, the perception is that the vocabulary is different, but the source is a single idea or germ. That is efficiency. And I like that.

Creating “The Key” in Pattern Control

The trick in controlling the pattern is in understanding how it works in the different metrics and then picking the parts of the pattern that work best for you, given how you intend to use it. If I’ve just confused you, don’t worry, we’re going to look at an example below.

Using the RLF pattern as sixteenths notes takes a minute to grasp because you are using a three note pattern in an even numbered rhythm. This is where you have to figure out how the pattern “plays out” in the chosen rhythm.

In order to understand how RLF works as 16th notes, you simply must write the pattern out and see how it resolves back to “One.” I refer to this sequence as “The Key,” as it unlocks the mystery of the use of the pattern, and allows me to extract the pieces I need to use as I see fit.

Look at the example below, and you’ll understand what I mean. 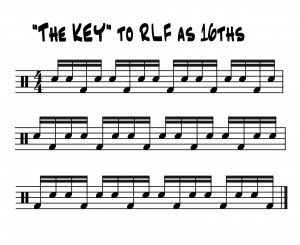 Now, with this all laid out in front of me, I can pick pieces that make sense to use in my playing. Let’s assume we’re playing rock music. One of the most common uses for sixteenth notes is a full measure fill (four beats). Let’s look at creating a great sounding fill using RLF for a full measure using this method.

Have a look at the fill below. I picked the third measure of the key for this one, so the fill starts with the foot. Because the measure ends with a foot as well, I decided to crash on that beat as well. When the pattern loops, going back to “One,” the two crashes in a row, on the “a” and the “1” sound pretty slick.

Don’t be confused by the fact that this fill starts with the foot. Look at the “Key” and you’ll realize that FRL is actually equivalent to RLF….it’s merely an inversion.

How To Use The Concept of “Pattern Control”

I hope that I’ve made this Pattern Control concept clear. It can work for any pattern that you like; simply pick one, and pick one rhythmic metric, and write your own “Key.” Then, extract the parts you like and have at it.

You can download a PDF of the two examples shown in this article here: Introduction Examples

What We Will Explore In This Series

RLF is just beginning. I will select multiple patterns that I use in my playing, and explore their use in various rhythmic metrics and sound sources. In addition, I plan on showing how to apply the ideas in both Rock AND Jazz.

Why This Is Different From Other Material

Part of why I was inspired to write this is that some of the drumming literature approaches similar concepts in an exhaustive manner. I believe that wastes your time. Personally, I don’t want to learn every single iteration of a pattern or idea. I only want to explore the ones that sound good! Those are the ones I might actually use in my playing. So the idea here is to create a system for working with ideas that you think sound good, and then to gain control over those ideas so that you can use them in your playing. That makes sense to me. The idea here is to make music, not to create an encyclopedia of useless drumming exercises. I’m not going to waste your time with crazy math centric stuff that will send your band mates running for the exits. Just the good stuff. Onward!