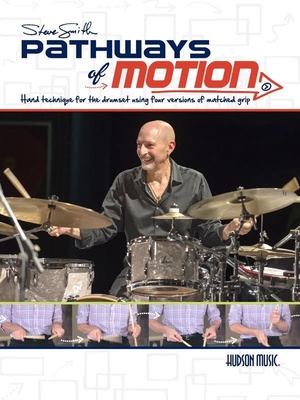 A few days ago, I received an email via Modern Drummer’s email list about a new educational release from the great Steve Smith called “Pathways of Motion.” After reading the email, I immediately clicked the link to Amazon and bought my very own copy. Want to know why? Read on, my dear obsessed drummers, read on.

In “Pathways of Motion,” Steve Smith reveals the technical secrets of matched grip. He explains more in the “introduction” video below, but a few years ago, Steve began digging into the nuances of matched grip in a way that he had not done before. He had been more reliant on traditional grip in the past. However, traditional grip can be physically demanding over time, especially with the kind of repetition that professional drummers subject themselves to. Presumably thinking that matched could give him a bit of a break from those physical demands, Steve began digging deeper into the mechanics of matched grip.

No doubt, he discovered a lot. In fact, the book and DVD promises the details on the mechanics of four different grips within the matched grip umbrella.

As some of you know, I’ve been on the same path–moving from my previously favored traditional grip–and exploring the technique of matched grip. In fact, I’ve been writing about it for quite some time. As reference, you can check out, “The Evolution of Your Drumming Technique,” and “The Trouble with Traditional Grip.”

I started digging into matched (again), and moving back towards that being my primary grip sometime in 2014. Matched was my first grip as a teenager (I began playing at age 13), but then, after seeing all the great jazz drummers using traditional, I migrated in that direction. Seeing my heroes play with traditional grip, and seeking a deep command of technique, I dove into traditional with serious enthusiasm. After all, if Buddy Rich, Tony Williams, Philly Joe Jones and Elvin Jones all played that way, and they all had incredible hand technique, why would one even question that traditional grip was the way to go?

Eventually, I found that traditional grip, despite my skill with it, felt awkward and lacked the power I needed for some of my playing. Yet, my right hand, using matched, was extraordinarily fluid, and I chalked that up to an enormous amount of time playing that way over my life. In particular, I believe that working on my jazz ride cymbal playing (for hundreds of hours) with my right hand was a big part of why my right hand feels so powerful and versatile.

So, when I heard Steve Smith talking about his journey into matched grip (pun intended?), I was struck by what he was saying. Steve was on the exact same journey I am on. And he is ready to share what he’s found. Here is one of the world’s best and he’s speaking directly to me because he’s been focused on the exact same issue that I’ve been focused on. Now do you understand why I bought my copy so quickly?