This past week I did a recording session with a great producer, Felix McTeigue, who I work with a lot. We tracked 4 songs in about 3 and a half hours.

One of the secrets of being able to play a song “perfectly” on a session is to create a chart that can guide you through the arrangement. On this session, the bassist, guitarist and I would sit and listen to the “scratch track” that the artist created several times, discuss some ideas with the producer, and then go and record. I don’t think we ever listened to the song more than three or four times before we recorded it.

By the way, a scratch track is a guide version of the song that usually has a rough vocal and accompaniment instrument, such as a guitar or piano. It is almost always recorded to a click. In this case, we were listening to guitar and vocals.

Most rock and pop songs consist of several types of musical sections: the verse, chorus and bridge. Sometimes there is a solo section too.

You’ll see an example of one of the charts I made the other night below.

Notice that sections are notated with “V1,” V2,” etc, for first verse and second verse. Actually, I forgot to mark the beginning of the chart with “V1” but I meant to. The second line shows “V2.”

Similarly I used “C” for chorus. I will either write “bridge” or “solo” or use the first letters “B” or “S” to abbreviate for those sections. At the bottom of the chart is the a section marked “Bridge/End” which means that the song ended with an abbreviated version of the bridge.

You’ll also see that I mark the number of bars rather than writing things out note for note. This is one of the big time savers. For example, at the beginning of the chart, you’ll see the word “count” with four slashes below it. That means that the track begins with a single measure of 4/4; counting me in to the beginning of the track. This is important to know….so I know when to start playing.

The chart tells me exactly what I need to do.

Now back to the control room as I write the chart.

As i listen through the scratch track, I am listening for structure and significant rhythms that stand out. These rhythms may turn out to be accents that the band should play together or perhaps even a place that the band stops or starts. 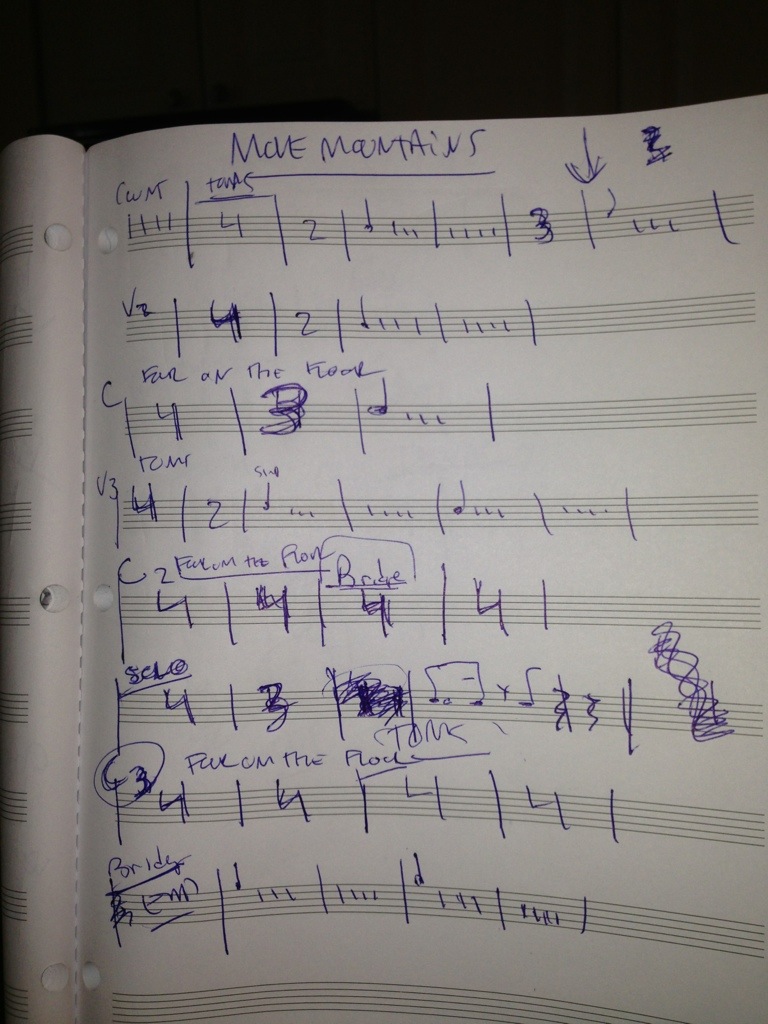 You can see an example of this on the third line up from the bottom of the page, all the way to the right of the section that is marked “solo.” That dotted eighth/ sixteenth followed by an eighth is a frequently seen and heard rhythm. I heard the guitar playing this on the scratch track— it stood out and it turns out that the whole band hit that figure together.

Finally, once I have the chart complete, there are notes on what to play.

You can see several places where I wrote “Toms,” so I knew that the producer was looking for a Tom Tom heavy beat on the verses. He specifically asked me for that in those specific places, so I just wrote it in on the chart so I would remember.

You’ll also notice that I marked “four on the floor” during the chorus. This just means to play the bass drum on all four quarter notes while playing the snare on 2 and 4.

Those are the highlights of how I chart songs quickly for recording sessions. It is not that difficult to do, but it can be critical to success.

Studio time and musicians’ time costs money, so efficient performances are one thing that a producer looks for. Wasting time in the studio by making frequent mistakes due to not knowing an arrangement is a good way to make sure that the producer doesn’t call you the next time. The chart allows you to “learn” the song very quickly.

With a chart that lays out the song like a map, you are much more free to think about other things, like creativity and groove…..and that’s what it’s really all about anyway.