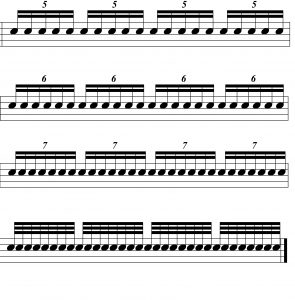 There is a great technique book called “Savage Rudimental Workout,” that I think is a bit overlooked. I don’t hear much about this book in any of the usual channels–chat rooms, magazines, social media etc. I’ve been using the book with advanced beginners to help with technique. The other day, I was working on the first piece in the book with a student.

The piece is called “Relax and Roll with it,” and is designed to help develop the single stroke roll. The very last line of the piece sequentially simulates the hands speeding up by moving through figures that get more and more dense.

One of the things that makes this so tricky is the inclusion of quintuplets (“fives”) and septuplets (“sevens”) in the progression.   These are “artificial groupings” that are helpful to know but they are not part of the usual beginner’s repertoire. So, inspired by one student’s difficulty with “Relax and Roll with It,” the PDF of exercises included here was created.

The PDF below will take you through the following rhythmic metrics:

Not surprisingly, many students have trouble navigating through this metric minefield.   Here, then, is the answer to said navigation. Use the attached PDF, “Rhythmic Control Part 3,”  as a beginning framework for working on moving in and out of these different subdivisions.

Start slowly, use a metronome, and go for even strokes at the different rates. For those rhythms that are unfamiliar, simply work until you can even play the required number of notes evenly with the click, and count out loud. For fives, just say: “one, two, three, four, five” while striking each note. Use a similar method for sevens. Work towards feeling equally comfortable with how each rhythm sounds and feels. Eventually, you will be able to move through the exercises with ease.  This exercise is also a great way to help you work on your single stroke roll.

Have at it by downloading the PDF:  rhythmic control three