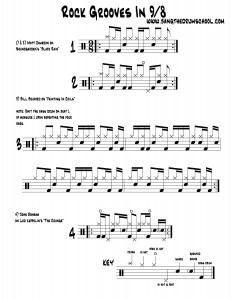 The attached PDF will give you three great examples of serious groove playing in 9/8.

All three examples show what happens when the drummer lets the music dictate the groove. The most musical approach to grooving in odd times is just that–find a way to make it have a pocket. The way to do that is to let the riff show you the way.

In each case here, if you listen to the track, you’ll understand what I mean. The guitar and bass play a very rhythmic riff, and the drummer just jumps onboard.