I’ve always loved Queen. But I have a new-found admiration for drummer Roger Taylor now. Check out his drumming on the track “Under Pressure” and you’ll see why. He’s an under appreciated gem of a drummer, so I wanted to make sure I gave him some props by presenting this transcription. 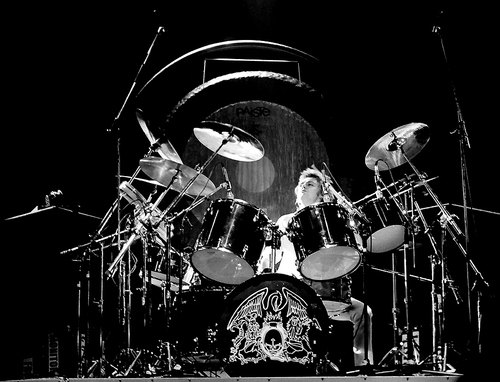 Background On Why I Transcribed This

Part of why I am so open to playing all kinds of gigs with all kinds of people is because of the unexpected things you learn along the way. In this case, for the show I played today, I had to learn Queen and David Bowie’s tune, “Under Pressure.” As I reviewed the songs for the gig, this one in particular stood out because of the semi-crazy drum break in the middle. 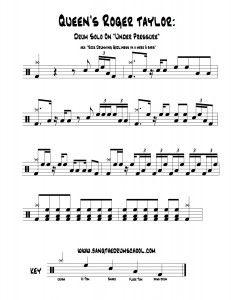 It’s so cool! And I really wanted to get it right. So I transcribed it. Now, as a small disclaimer: Since Roger Taylor had a fairly big drum kit (see photo) and I am fond of using a four-piece kit, I took some liberties with the transcription to make it useful for me on this gig. I had to re-work what he played so it would work on a smaller set-up. This is NOT a note-for-note transcription.

However, the rhythms and phrasing of what’s presented are spot on, so I feel comfortable that I’ve captured the spirit of his drumming in this section of the song. Perhaps this notion can be instructive as well….it is not always necessary to learn things note-for-note. Sometimes, it is far more productive to learn a piece of music in the manner that I did here: for one’s specific use.

I like what Roger did here. He really goes off, and although there are some chops here–in particular the sixteenth note triplets sound impressive–the real king of the piece is his phrasing. Like a great jazz drummer, he leaves space. And there is one phrase that he repeats frequently that adds a very syncopated feeling to the entire piece. I’m not going to tell you what that phrase is, but if you study the transcription, you’ll know…it is definitely a jazzy phrase.

The other interesting thing is that despite the big crashes on the “one” of almost every single bar, the playing does not sound linear or stiff. That is one my favorite things about the drumming in this section–Roger is crashing on the beginning of every bar and it STILL sounds loose and swinging.

That alone makes this worth learning.