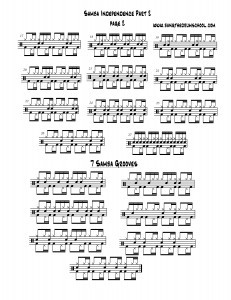 The introductory exercises on Samba Independence (Part One), were meant to get the beginning drummer used to the samba bass drum pattern and the majority of common snare drum variations that could be played against that pattern. The cymbal pattern used in that introductory set of exercises was simple eighth notes….a “straight” pattern of continuous eighth notes.

In our follow up, Part Two, we introduce the ride cymbal pattern that is more likely to be required on a real gig. It’s the flattened-out, latin or funk equivalent of the jazz ride cymbal pattern. Playing the left hand/snare drum variations is a little trickier with this cymbal pattern, but that is the whole point of the exercises…..to develop the desired independence. The independence developed through the practice of these exercises will give you the necessary coordination to play bossa novas as well. As an extra side benefit, your ability to play doubles with your bass drum foot will be improve too. If you are working towards playing jazz, I would strongly recommend working through these exercises using the “heel down” bass drum pedal technique….you’ll have more control over your volume this way.

Go slow at first if you need to…..precision is more important than speed.

Here is the PDF for you to download: Samba Independence Part Two