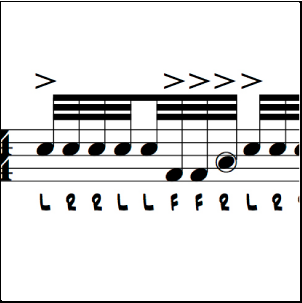 With Nasty Lick #66, we return to ways to blaze 32nd notes. Try this one out. Here is the PDF of the idea for you to download: Nasty Lick 66 PDF.

If you’ve been reading this blog, you may recall a slight obsession of mine with six stroke rolls and “reverse” six stroke rolls. I have found the six stroke roll (rllrrl) and it’s reverse (lrrllr) to be very useful on the drum kit. Understanding that I use these patterns a lot in my playing will help you understand the mental progression of how I came to “Nasty Lick 66.” Ultimately I want you to explore this way of thinking so you can more easily come up with your own licks. A tiny change to an existing idea can lead to powerful new ideas.

In this case, I simply added two bass drums notes right before the last note of a reverse six stroke roll (so, lrrllr became lrrllffr) and came up with a way to orchestrate the pattern that I liked. Pretty simple, but you have to commit to the process of digging into and playing around with ideas that you like. Simply trust that you’ll most likely come up with good stuff if you do so.

That’s all for now. Hope this stimulates some new ideas for you…..or simply take this lick and blaze it!