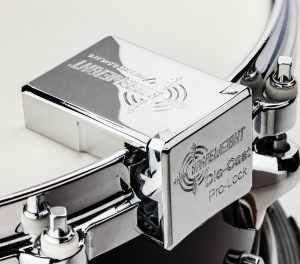 The old wallet on the snare drum trick eventually gets old. It’s a quick fix, and yes, it does work. But my wallet is bouncing around with every stroke of my stick, and then it looks like it may bounce off the snare onto the floor. And I start paying attention to my bouncing wallet when I should be getting into the music. Sound familiar? It kind of sucks.

Someone at Steve Maxwell’s drum shop here in NYC told me about the Snareweight and the idea sounded pretty cool to me. So, I got my hands on one and I’ve been road testing it a bit at some rehearsals and in the practice room.

Guess what? I love it. It is an elegant solution to an old problem. It is also a flexible solution. There are many different levels of dampening you can choose when using the Snareweight.

Plus, look at the photo above left. Do you see how substantial and how cool it looks? It feels solid in your hand, it locks quickly and easily on your snare rim, it’s magnetized, and it comes in a really cool box that looks like a pack of cigarettes. I don’t smoke anymore, but I miss that box! The Snareweight is a worthy gadget that I am now carrying around in my stickbag at all times.

Truth be told, sometimes I will begin a set with some dampening on my snare but a few songs into the set, I may decide that I want all of the ring to come through. When I was duct taping my wallet onto my snare drum that was a pain to deal with. With the Snareweight, it’s easy to take it off or put it back on quickly.

The unit I’ve been using is the staple/flagship product, the “#4,” made of chrome, with the additional chrome “pro lock” included. The regular #4 will work on many snare drums, but if you have die-cast hoops you’ll want the “pro lock” in addition to the “#4” to allow your snare weight to work in all situations. The two pieces lock together like a mini metal magnetized jigsaw puzzle. Easy. And cool.

The #4 comes with a small leather dampener insert, magnetized to sit inside the Snareweight. But, you can easily remove that dampener and insert other magnetized dampeners, like the “’70s,” which are leather strips that sit on the outer rim of the drum. These options give you different amounts of dampening depending on your taste.

Now, this may sound kind of complicated, but actually, it’s not. The design of the Snareweight was obviously very well planned and it works very easily. I just opened the box that I received from Matt at Snareweight, and without reading any instructions, I was quickly able to figure out how it all worked. It’s well made and very easy and cool to use.

If you like gadgets, you’re going to love the Snareweight. I highly recommend it.