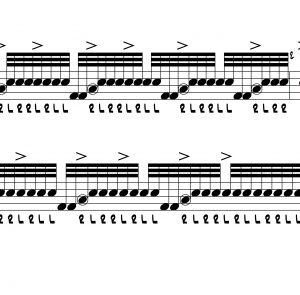 Staying on the same track as last time, today–with “Nasty Lick #73”–we continue with more variations and combinations of paradiddles as 32nd notes. Expect more like this one in the near future; this idea allows many possibilities and so far they all sound great.

To re-cap the notion we’re using here….simply take paradiddles, paradiddle-diddles and groups of two bass drum notes, all as 32nd notes, and mix them around to create awesome sounding soloing ideas. The accents often move around in crazy ways—but that’s OK—it’s a solo!