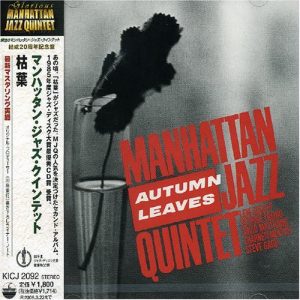 Ever since I wrote the piece about Gadd’s playing with the Manhattan Jazz Quintet, I’ve been itching to give you my transcription of his fours from “Jordu.” Steve takes eight fours on the tune, which is from the “Autumn Leaves” album released in 1985. It turns out that the transcribing of these mini solos is a bit more difficult than I thought, and I’ve been revising my original transcription….polishing the details and making sure that it is worthy and ready for publication on the world wide web.

Since I’m still tweaking it, I decided to whet your appetite a little by posting just the first two fours. I’ll follow up shortly with the rest, but these are both great and there are good lessons to be learned from checking them out.

First, get your hands on the PDF by clicking this link: Gadds Fours on Jordu Part One

Proof That The Rudiments Are Worthwhile

The first lesson is that rudiments are useful! Check out the first four. The first lick Gadd plays is a combination of a single paradiddle and left handed paradiddle-diddle. It sounds amazing! So don’t listen to anyone who says the rudiments are a waste of time. This is a great example of why they are not.

Repeating A Phrase is a Good Way to Hook Your Audience

The second lesson, which you can learn by checking out the second four, is that repeating a great sounding lick or phrase is a good strategy to get your audience excited. Steve is great at doing this, and it is one of the things that I believe makes him such a strong soloist. Sticking with a single idea for a number of measures will give your audience something to latch onto. Musicians who play complicated patterns that change every few beats may think that they’re being slick, but I think they are losing an opportunity to build exciting solos by playing to other musicians rather than to the “layperson.”

That’s all for now. I’ll return shortly with the rest of Gadd’s transcribed fours from “Jordu.” Until then…