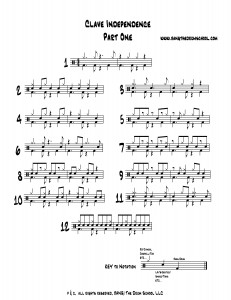 Clave Independence has been on my mind for a while. I first starting thinking about it when the left foot clave rage began a while back. Initially, I rejected it because I did not consider Latin playing to be my main focus and I knew it would be a huge amount of work to get that particular skill together. Then I started to think about it some more, and I stumbled across Ignacio Berroa’s very interesting book, “Groovin’ In Clave.” In it, Ignacio explores independence with the cymbal hand playing the clave rhythm. That idea made much more sense to me than the left foot notion. I started working through the book, but the topic was too broad for me to make the kind of progress I wanted. The exercises in “Groovin’ in Clave” move you towards complete independence versus the right hand clave. They explore independence with both the left hand, right foot, as well as patterns that combine those limbs–all while keeping the right hand going with the clave rhythm. That kind of independence could be very useful, but for me, in my particular situation, it was too broad in scope. I thought I needed to narrow the parameters a bit so the task at hand would be easier to complete in a reasonable amount of time. Therefore, I added a foot ostinato to the endeavor. For me, the tumbao bass drum pattern seemed like the most useful one, and that is what these exercises include on the bass drum line. The exercises included here are what I initially came up with in order to work on the resulting independence concept.

You can download the worksheet by clicking on this link: Clave Independence Part One PDF

When you have mastered these 12 exercises, you will have a good amount of useful independence with your left hand versus the clave with your right hand, and an expanded tumbao with your right foot (ie. includes beat “one”). I did not include the left foot in these exercises. The exercises are difficult enough as it is…..I thought that adding a hi-hat line to the mix at this point could potentially muddy the waters. You can experiment with adding different left foot (hi-hat) patterns once you get the exercises down. Some possibilities are just “two” and “four,” or all the quarter notes, or even “one” and “three.”

I have to tell you, working these out took me a lot of time! Initially, having these patterns written down was extremely important because I could go very slowly and “muscle out” getting through the patterns.

Give these a try. I will follow up soon with some further worksheets as well as some right hand clave grooves I’ve been experimenting with. Since I would not have been able to experiment with any right hand clave grooves if I had not come up with these exercises, I am pleased to attest that they work! Have fun, and be patient….these are hard….at least they were for me.