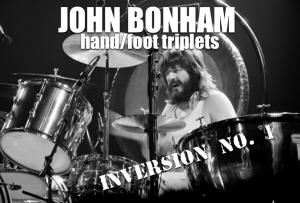 Anyone who has really studied John Bonham knows how he played his famous hand/foot triplets. Originally I thought the pattern was Right, Left, Foot, but that’s incorrect. The way that Bonham played them is: Left, Right, Foot. And man, when you get that lick fast and clean it sounds amazing.

Once I started working on the actual “Bonham way,” I began to think about inversions. What if I started the pattern on the second note of Bonham triplet? If I did that, the pattern becomes Right, Foot, Left.

I started messing around with that and I decided I really liked the way it sounded. Once you start playing Right Foot Left and combining it with other things (like six-stroke rolls for example), you can get a lot of great-sounding drumming magic from it.

So, here I present to you the PDF: John Bonham Hand/Foot Triplet Inversion #1

On the worksheet (just click the red text above–these are collectively referred to as “Nasty Licks #125”), the pattern is explained and notated in detail and there are several examples of some ways of playing it that I’ve come up with.

PS — for more Bonham related material on this blog check out:
7 Fills From John Bonham
and
Nasty Lick 34: Bonham from “Rock and Roll”