Neil Peart on the 3 Elements of Drumming Mastery 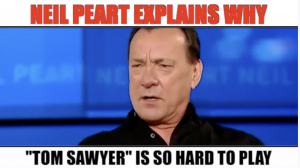